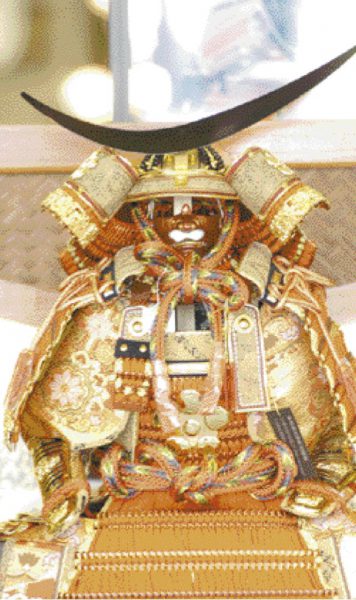 A long ago most of Osaka was under the sea. The Uemachi Daichi was the only land area and today this is a repository of historical treasures. You can see Hideyoshi’s remnants such as Karahori, the outside most of Osaka Castle, and Teramachi, a defense line in wartime. This area also holds remembrances of famous writers including Chikamatsu Monzaemon, Ihara Saikaku, and Naoki Sanjugo. Reminiscent houses and alleys create a relaxing atmosphere, and we unaware of the passage of time. 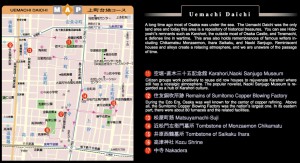 Citizen groups work positively to reuse old row houses to rejuvenate Karahori where still has a nostalgic atmosphere. The popular novelist, Naoki Sanjugo Museum is regarded as a hub of Karahori culture.

During the Edo Era, Osaka was well known for the center of copper refining. Above all, the Sumitomo Copper Blowing Factory was the nation’s largest one. In its eastern part, there were about 80 furnaces and the related facilities.

Matsuyamachi-suji, dubbed Matchamachi, is a doll’s town, which is filled with wholesale stores dealing with traditional dolls and toys. Japanese have a custom of making a scapegoat of dolls to expel evil spirits.

Chikamatsu left a lot of Joruri(puppet theater) and Kabuki masterpieces. He dramatized an actual double suicide and wrote Sonezaki Shinju, The Love Suicides at Sonezaki, which became all the rage at that time.

Ihara set the standard for Ukiyo-zoshi, or prose fiction describing ordinary people. In Sumiyoshi Taisha Shrire, he composed staggering 23,500 poems in a day and night, which set the best record of numerous poems.

Kozu Shrine enshrines the Emperor Nintoku. Lotteries were often performed to raise funds for repair in the Edo era. Its wide view of Osaka is famous nationwide.

Nakadera, a town composed of lots of temples, was made by Toyotomi Hideyoshi in order to make a defense line in wartime. Old wooden temples still remain, which creates an old downtown atmosphere.

Noh(classical Japanese performance) and Kyogen(classical comic theater) are mainly performed in this hall. With approximately 600 years history, Nohgaku is the oldest existing theatrical art in the world.

Was this Information helpful?
Yes Not really
0 of 1 people found this helpful.