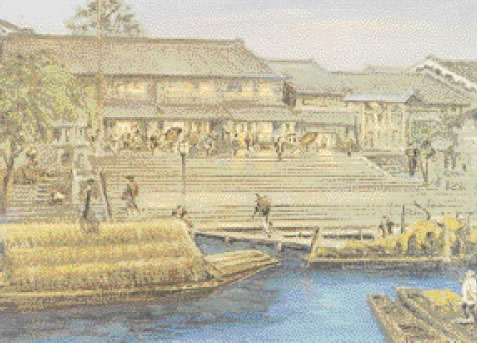 In modern ages, Osaka was called Tenka no Daidokoro or the kitchen of the nation. An active economic development nurtured a rational spirit among the people’s minds. The people became more interested in learning and thought. Various educational facilities were set up and developed by their own efforts. At first there was more emphasis on practical science for their own business, but this soon led to further studies such as Confucian thought, philosophy, religious studies, natural history and astronomy. Acquisition of scientific knowledge accumulated in modern ages enabled them to open the door to the next generation.

Yodoya was Osaka’s business tycoon in the Edo era. Yodoya bridge was built at his private expense.

Kaitokudo was a school fouded by Osaka’s heavyweights. Later, it was recognized as an official school in Osaka.

This place was used as a starting point when distance was calculated on main roads of western Japan.

The hanging bell was made to express appreciation to the Shogun, Tokugawa Iemitsu, for permanent exemption of Osaka’s property taxes.

Hakkenya was one of the piers for ships connecting Kyoto and Osaka in the Edo era. The fact that there were eight inns for sailors (Hachikenya) is the origin of the name.

Was this Information helpful?
Yes Not really
2 of 2 people found this helpful.