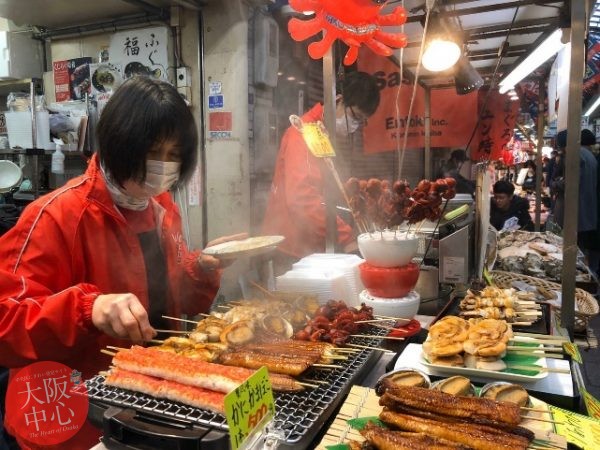 What I Discovered at Chuo Ward Osaka City
～私が発掘した大阪市中央区の魅力～

Kitahama Station－ When we came out of the station, we immediately saw a lot of buildings, which was a very different scenery than what we usually see in Osaka. It was also very interesting to see many old buildings mixed among the tall skyscrapers. It was a little like Boston because there were so many historical buildings in a modern city. Walking around, there were many interesting looking cafes and restaurants, and interesting architecture. I would recommend this place for people who want to see Western influence on Japanese history, or people who just like experiencing history and seeing old buildings.

Kitahama Retro Café – Kitahama Retro Café had a very calming atmosphere. It smelled like cinnamon and sugar when we entered. There were many English looking signs, flags, and posters, so it really felt like an old English café. For such a fashionable café, there was surprisingly a large serving of sandwiches. The smoked salmon and potato salad sandwiches were very good, even though they were a little messy to eat. The royal milk tea was also very nice. I really liked the honey flavored milk tea, and I liked the fact that I could take as many sugar cubes as I wanted. It was also my first time seeing sugar cubes in real life. I didn’t really like how much parsley there was on center of the plate. Other than that, and the fact that it was a little crowded, I really enjoyed the experience. Even though we were in Japan, it felt like teatime in England.

Semba building – The Semba building was a very natural-looking place. It felt like we were entering a Ghibli movie when we walked in. There were many different small stores and offices that sold small accessories and books. We were able to go to the rooftop, where there were a few picnic tables and a small shrine. Since it was winter, it was a bit chilly outside, but if it was warmer, it would be a perfect place for a picnic. It was out in the open with a small garden, with nobody around.

Osaka Castle Plum-grove – Before we entered in the Osaka Castle, there was a plum-grove. When we visited in February, the plums were almost in full bloom and many visitors were taking pictures of the plums. I was surprised that some people were taking pictures with professional-looking cameras. There were so many kinds of plums there that bloom at different times, so you can enjoy various plums for a long time, until the end of March. While walking through the plum-grove, we found a convenience store in the center of the garden. The store keeper let us try a cup of plum-tea. It smelled like real plums and a was little sour, so I didn’t like very much, but I would recommend trying it once.

Houkoku shrine－ There is a very sacred-looking place near Osaka castle called Houkoku shrine that is dedicated to three benefactors of Japan, Toyotomi Hideyoshi, Toyotomi Hideyori, and Toyotomi Hidenaga. When we passed through the Torii gate, we saw a great statue of Toyotomi Hideyoshi which was more rugged than I expected. This shrine mainly offers a lot of good luck and success in the future, so I recommend going there and making a wish for the future. Also, you can draw fortunes written in English, Korean, Chinese, or Japanese. I was happy to have gotten middle blessing.

Osaka Museum of History – After walking around Osaka Castle, we went to the Osaka Museum of History, which was very close by. This museum showed in chronological order the history of Sakai and the surrounding area. We first saw a lot of primitive tools made out of stone and iron, and very simple boats that people in the past used to go to Korea. We learned about the growth of the surrounding cities, and what life was like when towns were being built and under different leaders. We saw how old buildings were made and decorated, and how people made small rivers to connect to the ocean as the town expanded. It was also interesting to see the differences in styles in architecture and clothing through the different periods. Especially in the Taisho Era, Japan became very modern, so there were telephone booths, trolleys, and movie theaters. From the museum, it was also possible to get a very good view of the city and the Osaka Castle, so I recommend going to learn about how this amazing city was made.

Kuromon Market – The Kuromon Market is a pretty large market in Nipponbashi, where a lot of small stands and stores sell fresh seafood, beef, and fruit. In the market, you can find very expensive strawberries that are completely white. You can probably only eat these in Japan, so if you get a chance and have the money, I would recommend trying it. We ate Japanese scallop, oysters, and croquettes. The oysters were very juicy, so I would recommend trying that. You should be careful that you don’t accidentally buy the crab cake, instead of actual crab. It is cheaper, but not very tasty. Other foods you can try there are squid, fugu, wagyu, and sea urchin. You can eat a lot of the food in the market raw, but if you are uncomfortable, most of the stores offer to cook it for you. Since many foreign tourists visit this market, there are signs in different languages and the shop owners can speak some English, making it a very tourist-friendly area.

Hozenji Temple – This is a small temple in the middle of Namba, where you can draw fortunes and pray at some shrines. There is a shrine where you can throw water on a statue. Since many people go do it, it is now covered in moss. You can also buy charms, write down your wishes or have them write calligraphy for you commemorating your shrine visit (Goshuin).

Was this Information helpful?
Yes Not really
1 of 1 people found this helpful.