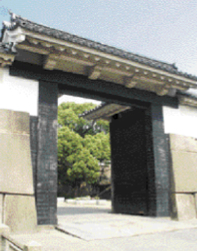 Modern Osaka has its origin in the establishment of ”Osaka(Ishiyama)Gobou” by Rennyo. Osaka became one of the most famous cities in the world after Hideyoshi Toyotomi who succeeded Nobunaga Oda’s spirit Osaka Castle in 1583. Hideyoshi found Uemachi Daichi very important as the location of Osaka because Yodogawa river and Yamatogawa river joined in its northern part. Uemachi Daichi , the center of water transport in Kinki region and Seto inland sea could easily be protected by the military. Large-scale construction was done for establishing a base for Toyotomi’s administration, and Osaka became the political and economic center of Japan. The castle was rebuilt by the Tokugawa family after the ruin of the Toyotomi family, and it was the base of the Tokugawa administration in western Japan by the end of the Edo era. Currently, This historic site is loved by many as a park. 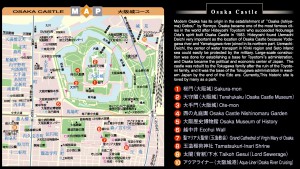 Tenshukaku(the donjon)built by Tokugawa was about 58 meters high which exceeded the original one built by Hideyoshi(burned in a battle). Tokugawa used the donjon to show his power. Tokugawa’s donjon was burned by lightning in 1665 and thanks to the donations by citizens, the current one was rebuilt in 1931 modeled on Hideyoshi’s donjon.

Ote-mon is the front gate of Osaka Castle. When you enter the Ote-mon gate, you will see the Tamon-yagura turret built on the big stone wall; the square enclosed by the Ote-mon gate, the ensuing walls, and the Ote-guchi Masugata(Ote-Square). It was used to prevent enemies from entering inside of the castle.

Nishinomaru used to be where Hideyoshi’s wife, Nene lived in until Iyeyasu, Hideyoshi’s enemy occupied it. It now has been a well-known garden for cherry-blossoms, Hideyoshi’s favorite flower.

Osaka museum of history is located exactly at the site of Naniwa Nagara Toyosakinomiya established by Emperor Koutoku in the Aska Era. Each floor uniquely introduces the history of Osaka from ancient to modern times.

Christian Garasha Hosokawa told her vassal to kill her when enemy, Misunari Ishida tried to kidnap her at Sekigahara battle in 1600. The well inside Hosokawa family’s residence has been still preserved as Ecchui.

聖マリア大聖堂（玉造教会） Grand Cathedral of Virgin nary of Osaka

Tamatsukuri Church was originally established in 1894. The current one built in 1963 features 100 stained-glassed windows and store statues of Ukon Takayama, a Christian feudal lord and Garasya Hosokawa in front of the church.

“Tamatsukuri” is named after Tamatsukuribe, ancient craftsmen of ornaments. Ever since Hideyoshi Toyotomi rebuilt the shrine in 1603, it has become a guardian god of Osaka castle.

Hideyoshi who built Osaka Castle also developed an elaborate and unique sewer system spanning some 350km which in the oldest in Japan . Remnants of this 400 year old project can still be seen. (Reservations are need.)

Take the “Aqua-Liner” and tour the “Water Metropolis” from the river. The long, flat boat 2.3m in high (in total, above and under the water), so that it can pass under bridges.

Web Link
http://www.osakacastle.net/
Was this Information helpful?
Yes Not really
1 of 2 people found this helpful.