East Entrance to Dontonbori / A Neon Town of Feasting. 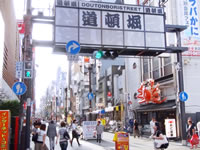 ●A Neon Town of Feasting.
The Kabuki theater stands prominent on this, the main street of Minami – which has even been called ‘The Broadway of Osaka’.   For those with a real love for the local food; an aptly named ‘flour tour’ – of the many noodle, takoyaki and okonomiyaki eateries in the area – is on offer.   Another interesting point to note is that most restaurants around here have their menus written in both Chinese and Korean as well as Japanese.

Search route from current location
Transportation
A two-minute walk from Exit No.14 at Namba Station on all subway lines
Was this Information helpful?
Yes Not really
0 of 0 people found this helpful.
同じエリアにこんなスポットがあります！

A theatrical hall given over to Kamigata style culture stands nearby. The local shrine, contained i …

All food is Halal. We have Malaysian cuisine as Well as Halal Japanese cuisine (rice-balls, miso sou …

Please let us know that you are Muslim. We have Japanese raised halal chicken, halal-only cutlery as …