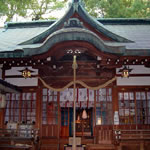 The legendary founder of Chinese medicine “Shinno” and the Japanese god of medicine “Sukunahikona no Mikoto” are both enshrined here. During the Osaka cholera outbreak of 1822, apothecaries sold pills containing a compound of ground tiger cranium and at that time people also made paper tiger figures and prayed for their health at this shrine. Ever since then tiger-like figures have become a popular symbol of this shrine.

The Site of Osaka Ginza