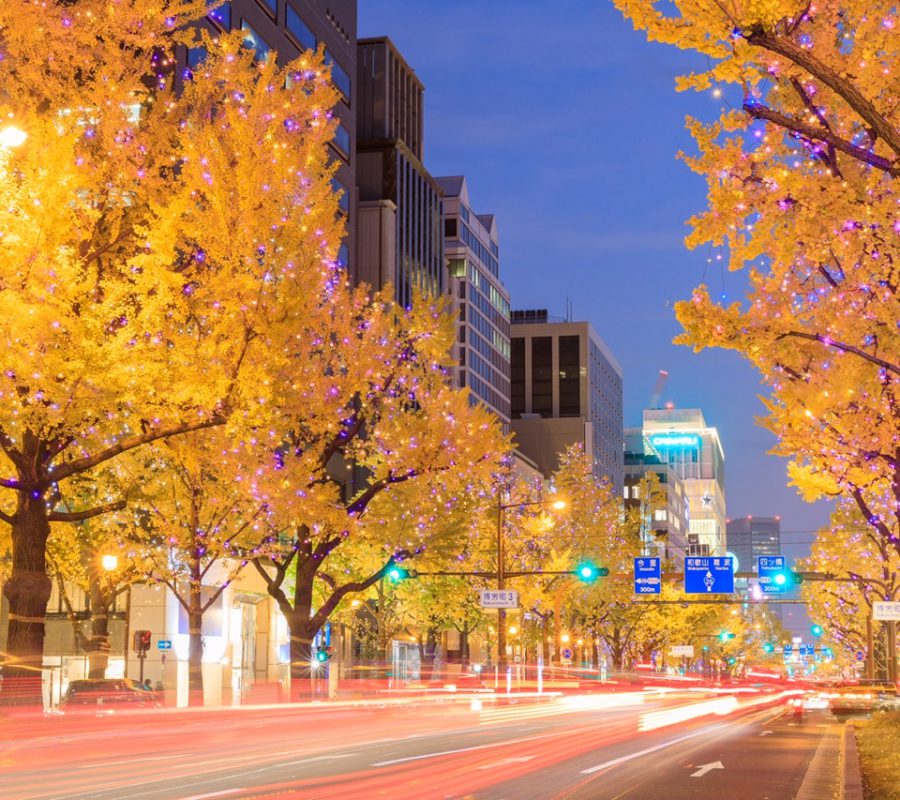 At the end of the 16th century, roughly the same time as the construction of Osaka Castle, development of the area around Mido-suji began, and an urban area was formed with “dori“ that ran east to west, and “suji” that ran north to south.
At the time, the “dori” that ran east-to-west to the Osaka Castle were the main roads, and although Mido-suji was also a busy road, it was a very narrow one, having a width of only about six meters. Even in the Meiji era (1868-1912), the “dori” were still the primary roads for traffic, but once Umeda and Namba stations were built, the need for a north-south axis increased.
The widening of Mido-suji started in 1930, and after a long and daunting period of construction work, it was opened in 1937.
The ginkgo trees lining the street, which have long been delighting pedestrians, were planted upon its completion, and they have been honored with distinctions such as being chosen as one of the 100 selections of the Osaka Green and being designated as an Osaka City Cultural Property. 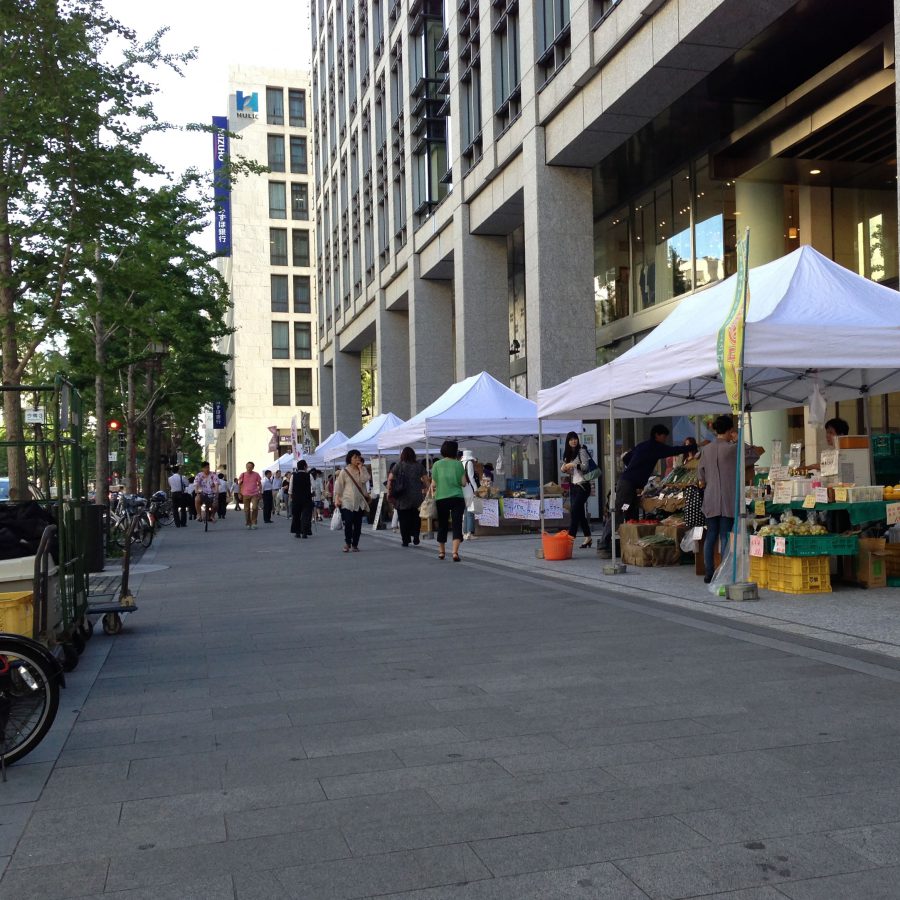 We are promoting the creation of spaces along Mido-suji that pedestrians can enjoy by holding markets regularly and various events throughout the year. 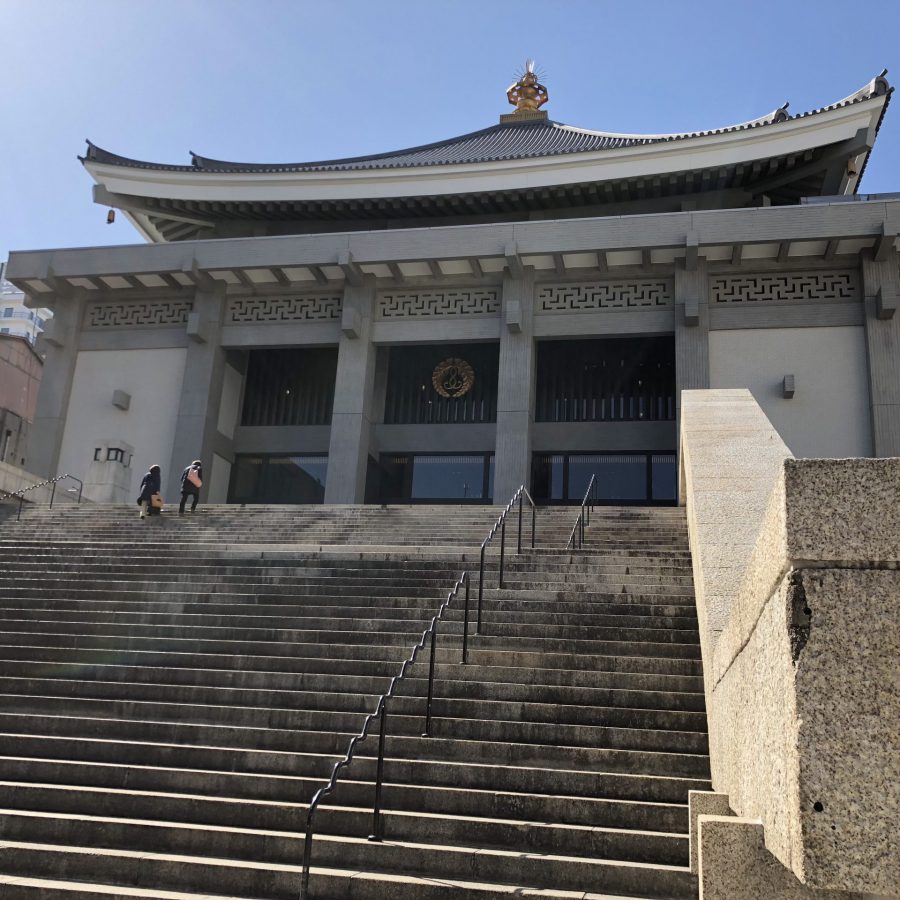 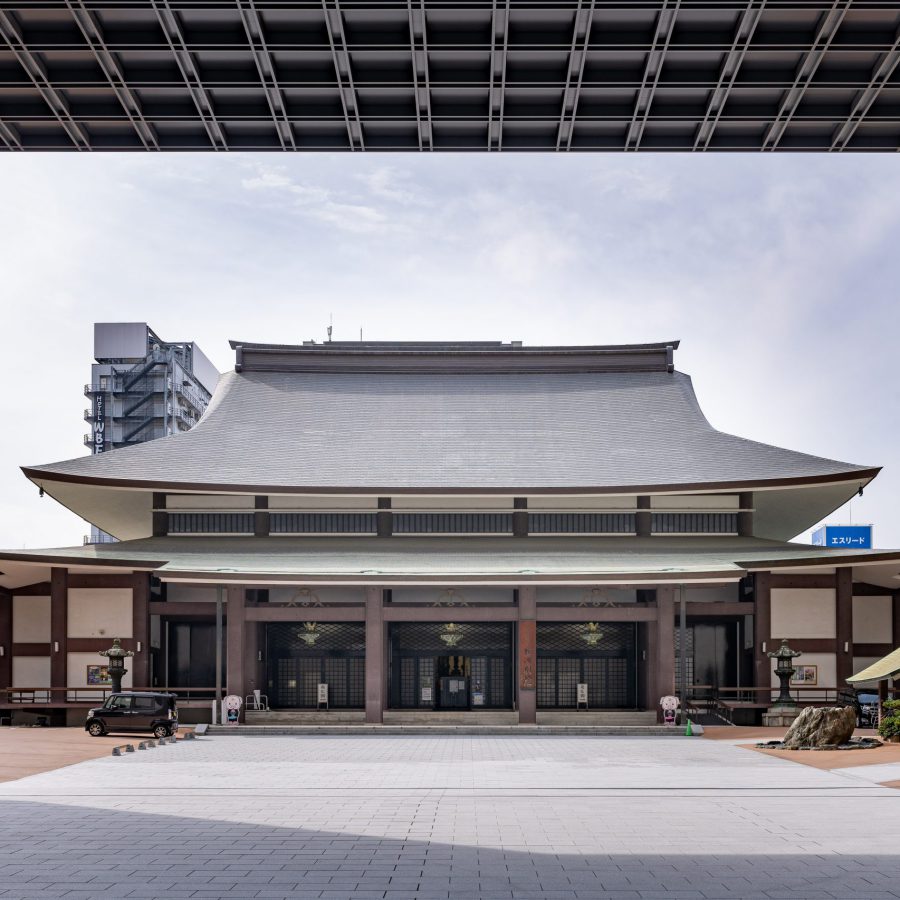 As Toyotomi Hideyoshi had divided Honganji Temple into Otani (east) and Honganji (west) sects, Namba Betsuin was constructed for the Otani sect, and Tsumura Betsuin for the Honganji sect. The name “Mido-suji” comes from the fact that the road passes by the front of the two Betsuin (Mido) temples. 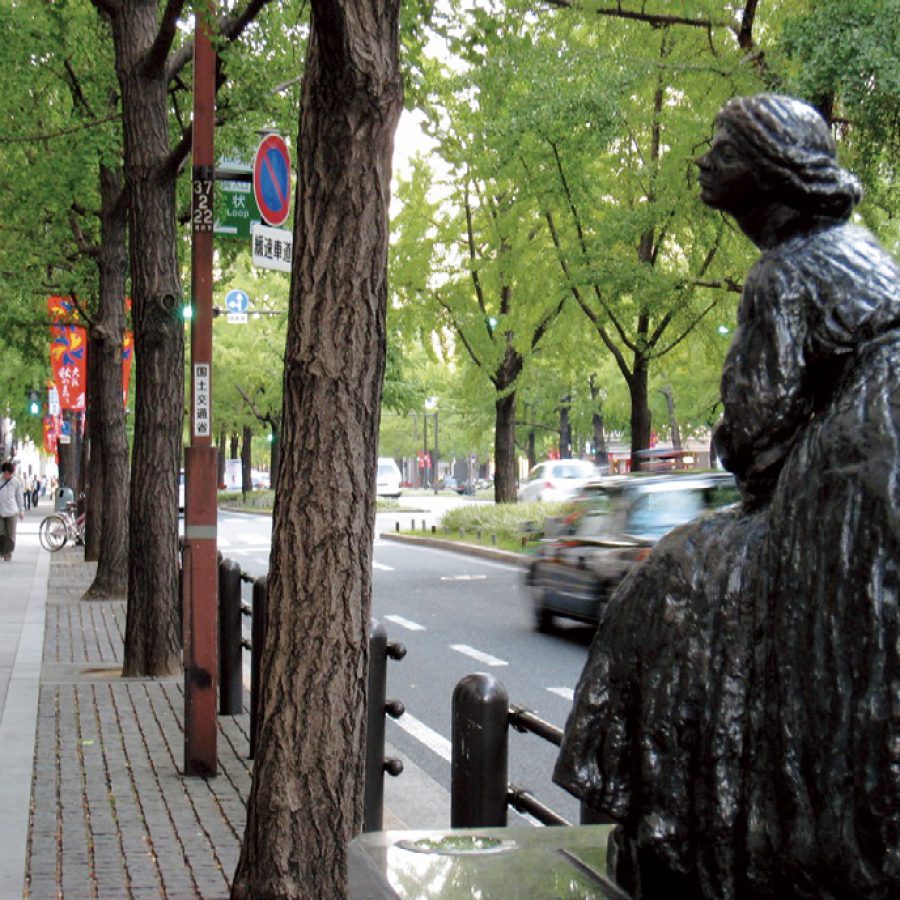 With the help of donations from companies in the Mido-suji area, a collection of world-class sculptures have been installed. 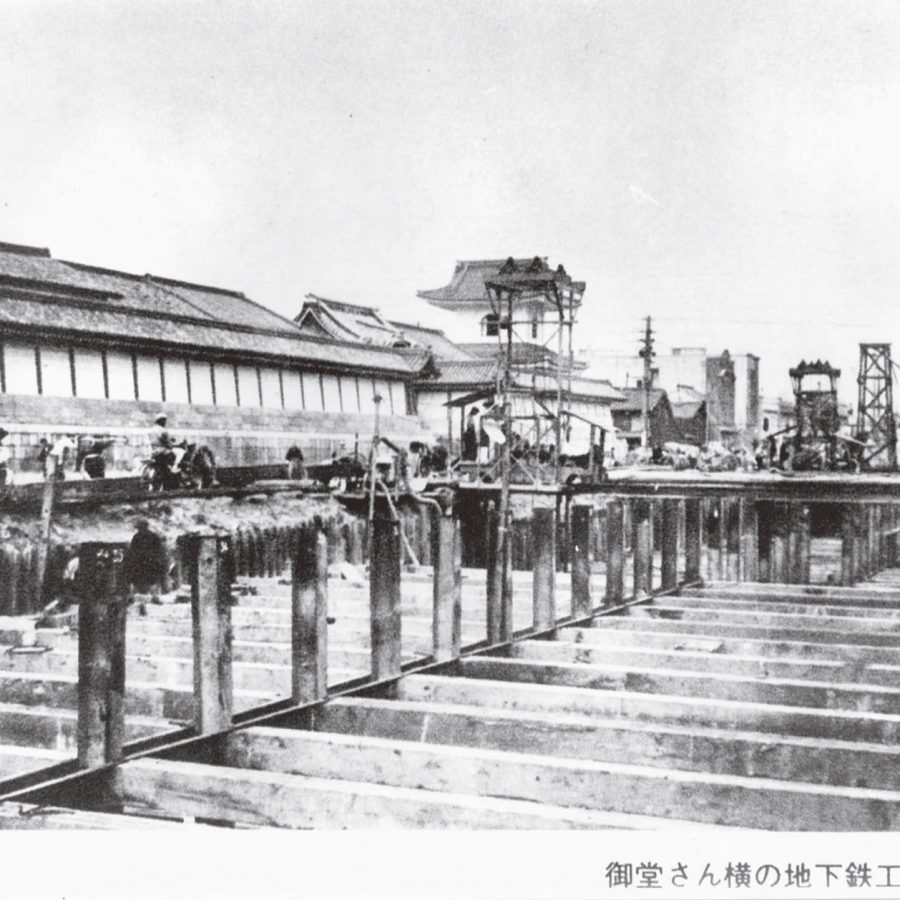 Construction of the Midosuji Line, Japan’s first municipal subway. Constructed in an age before the advent of tunnel-boring machinery, it was constructed by hammering steel sheet pile into places to form the walls and open-air excavation.
<1930> 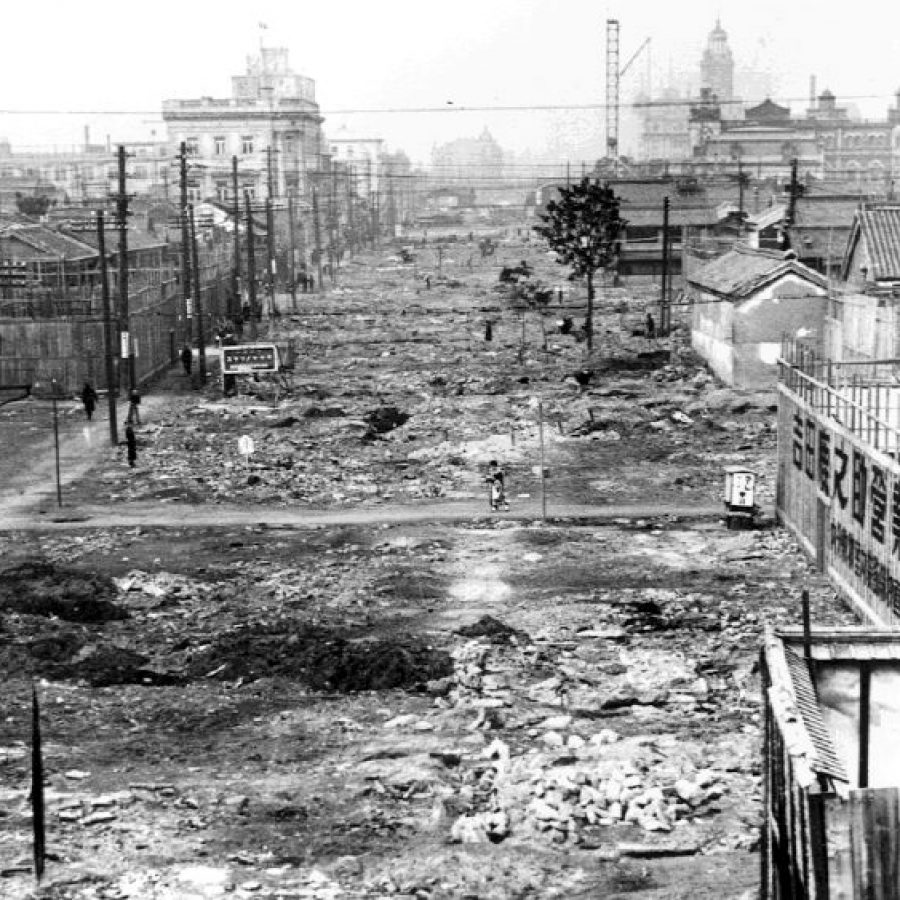 Just after the evacuation of the area ended.
The street in the foreground is Heiwamachi.
<1927> 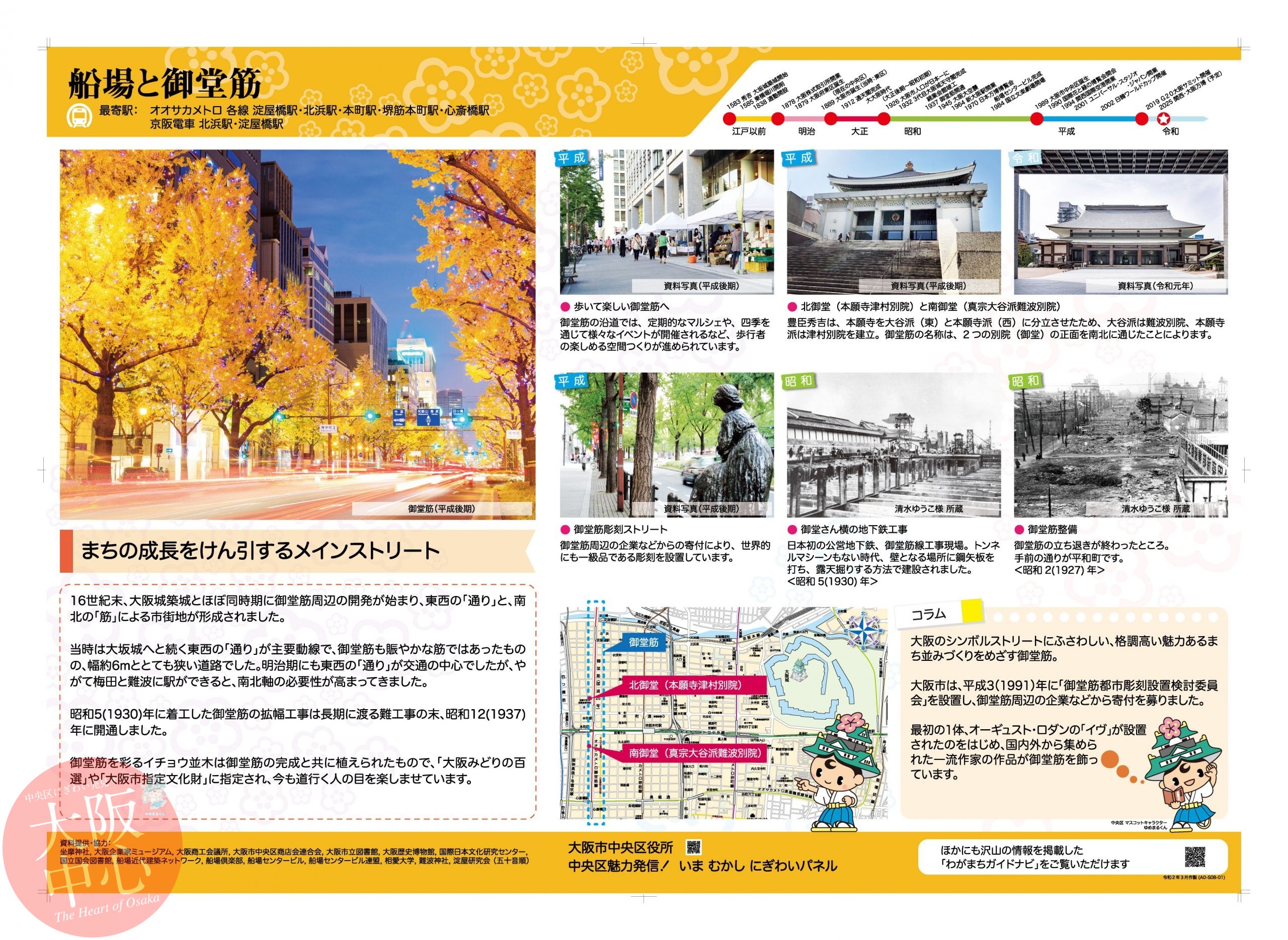 Mido-suji serves as a street that symbolizes Osaka, so Osaka City is making efforts to make it into an attractive and elegant cityscape.
In 1991, Osaka City established the Mido-suji Urban Sculpture Installation Committee and began collection donations from businesses located on and near Mido-suji.
Starting with the installation of the first of these sculptures, “Eve” by Auguste Rodin, works by leading artists from Japan and around the world decorate Mido-suji. 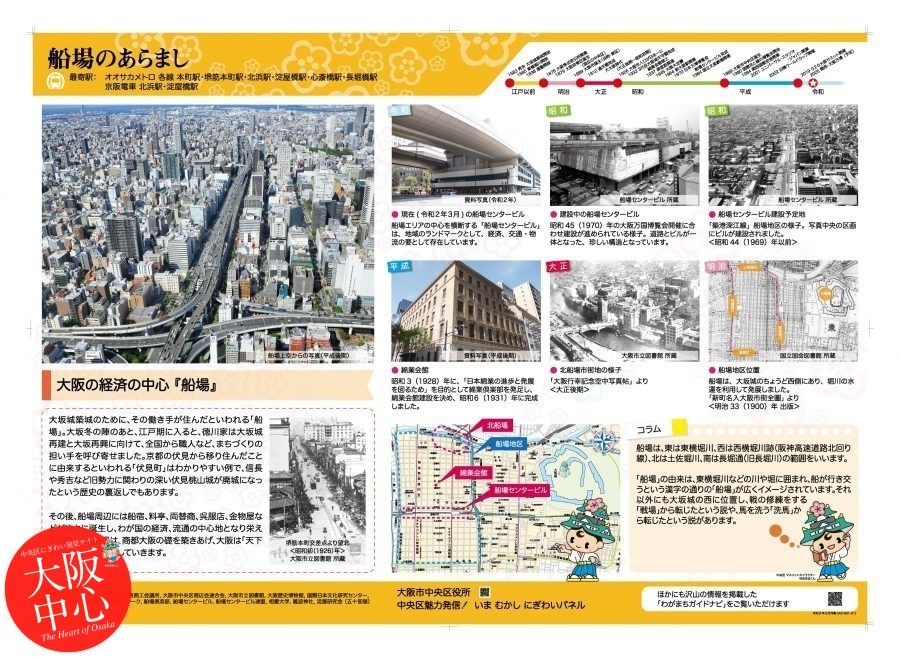 Semba, the financial heart of Osaka Semba is said to have been where the worke … 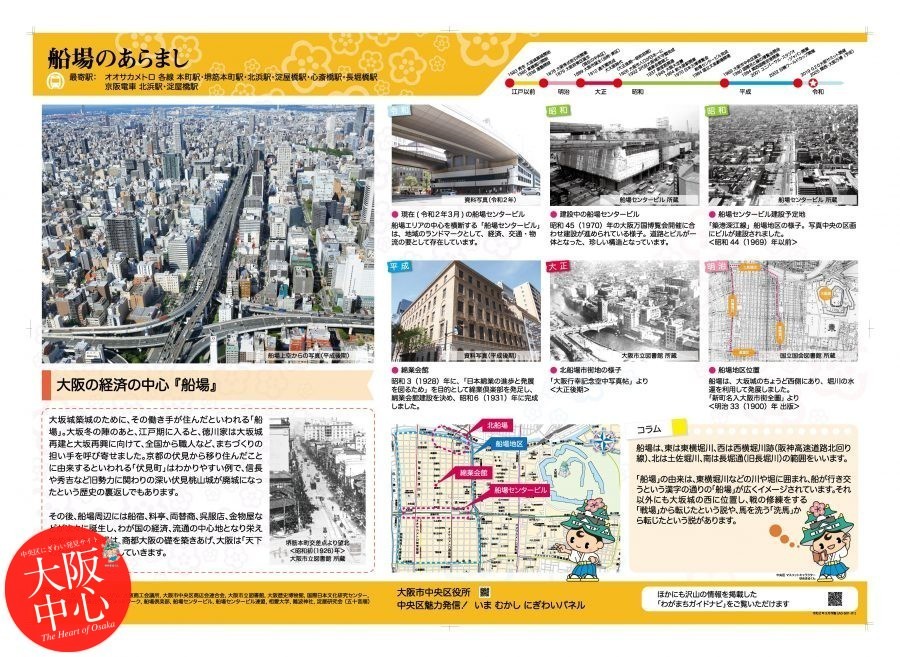 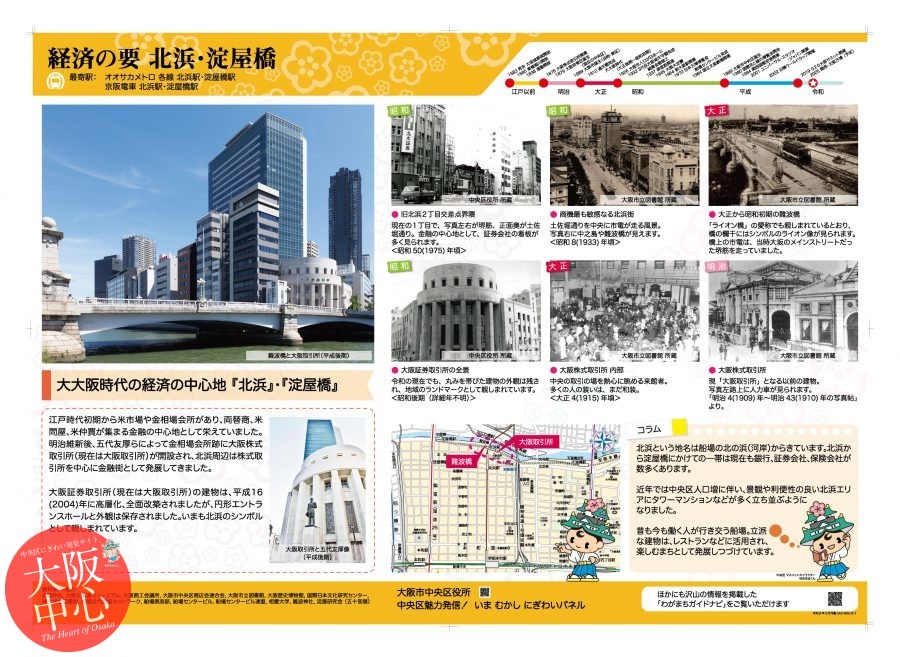 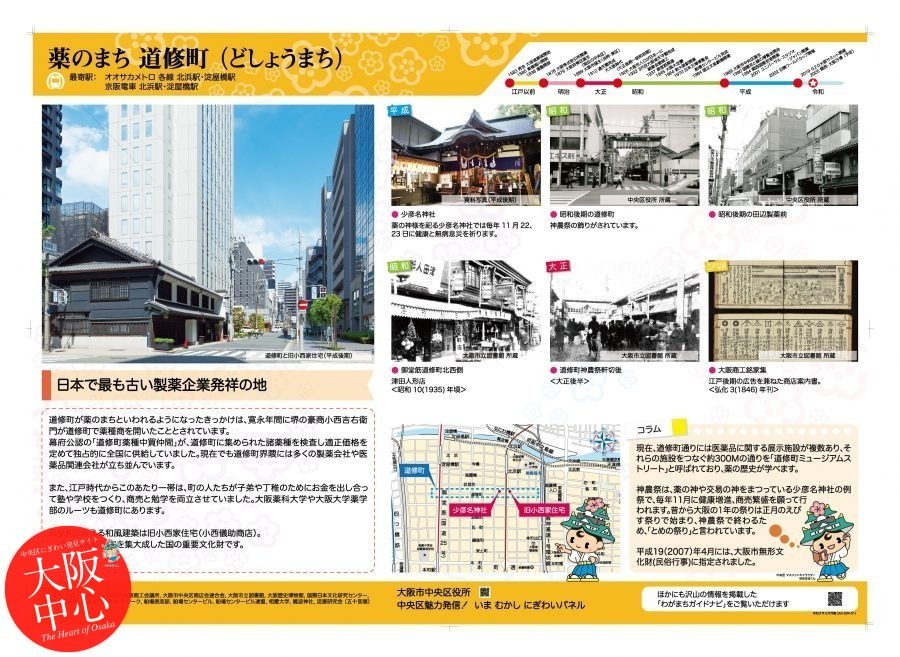 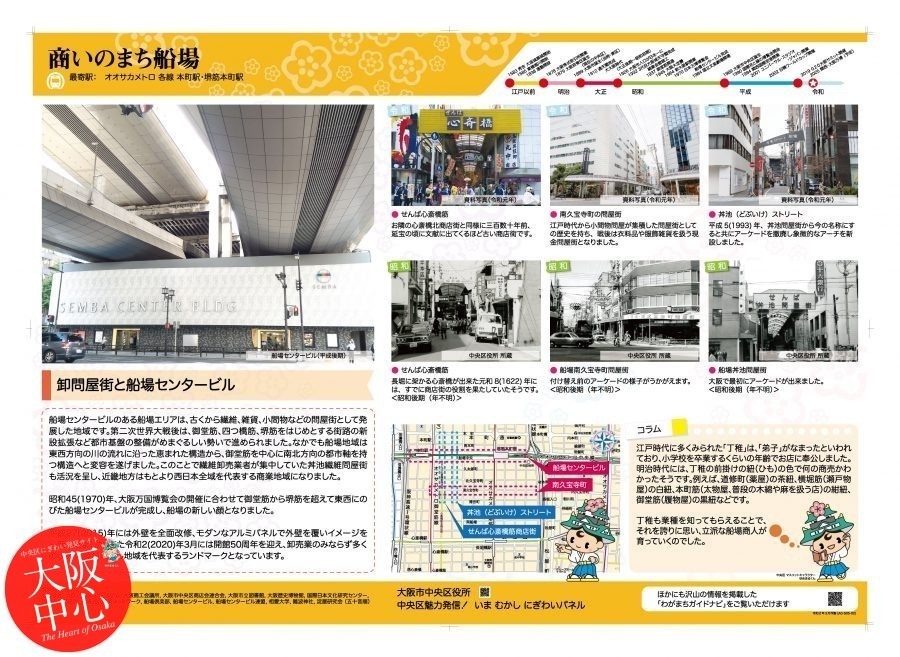 Semba Center Building and the wholesale district The Semba area, which centers … 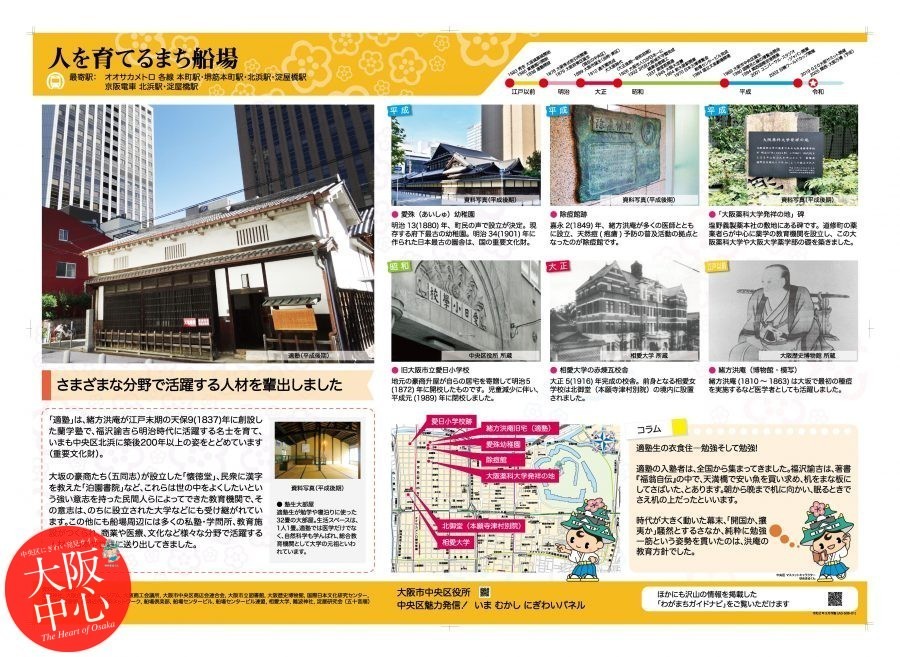 A0S06 – Semba, a Town that Nurtures its Residents 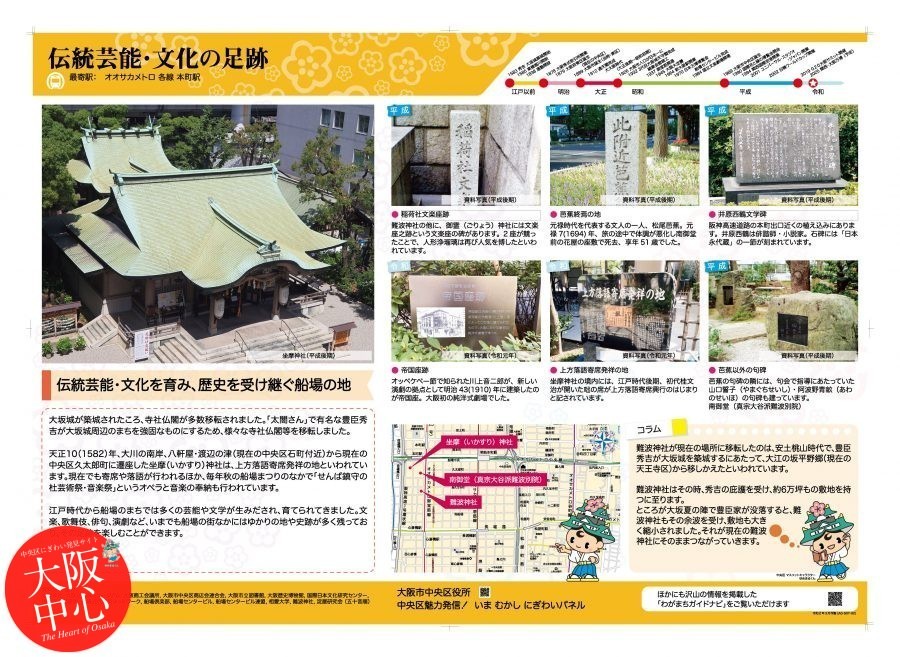 A0S07 – Traces of Traditional Performing Arts and Culture from the Past 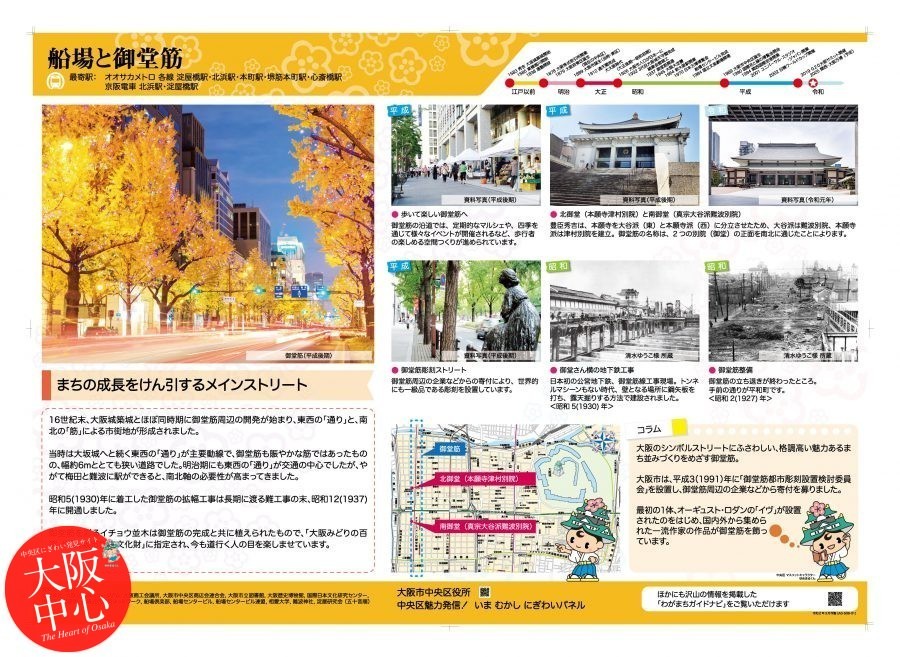 The city’s main street, leading the way to prosperity At the end of the 16th c … 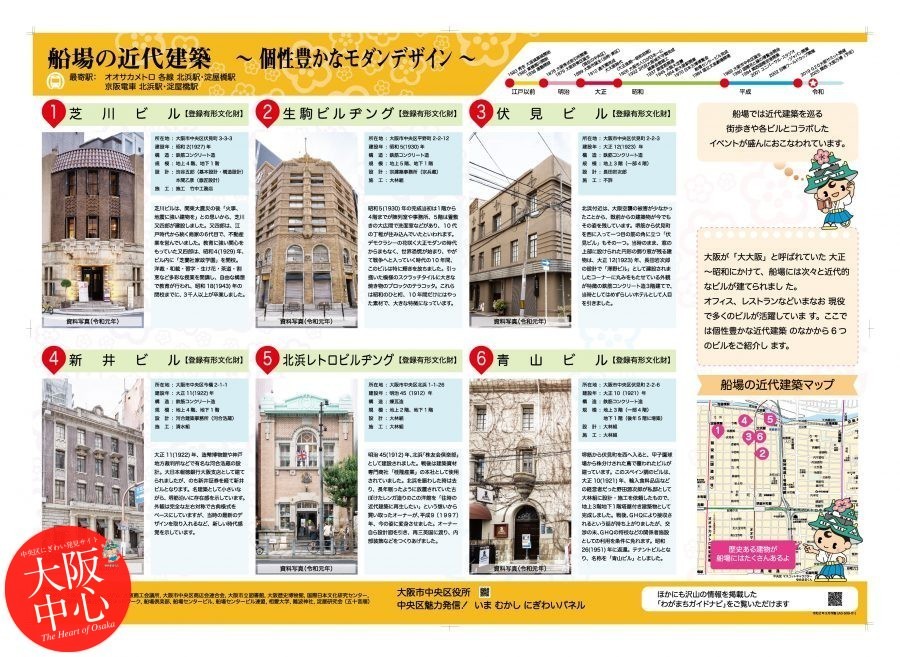 Shibakawa Building (registered as a Tangible Cultural Property) The Shibakawa … 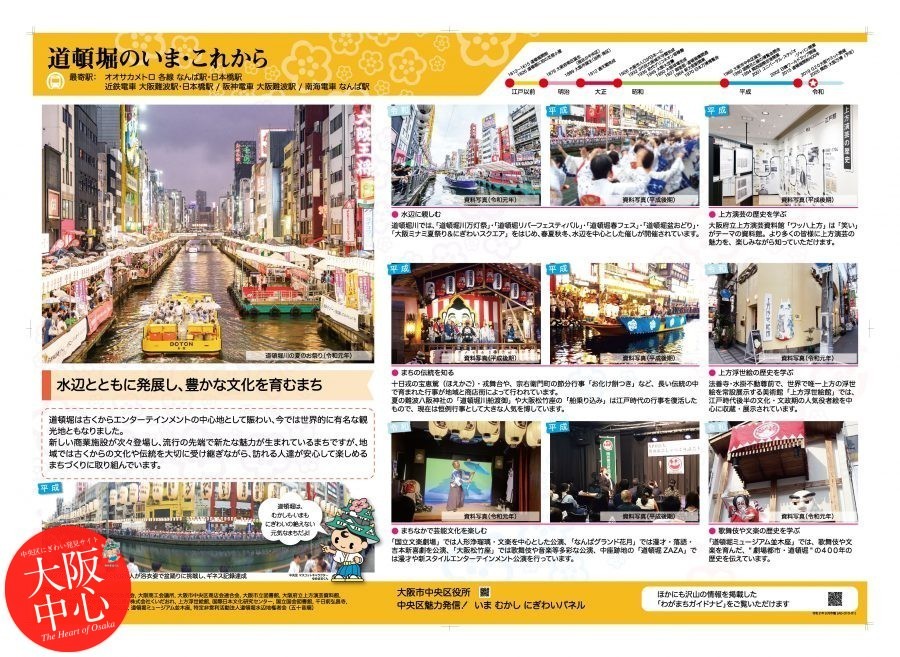 Looking to the future as we inherit and pass on tradition and culture. Semba h …